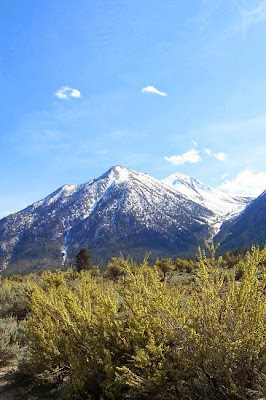 Job's Peak is the fouth highest peak in the Lake Tahoe area (after Freel Peak, Job's Sister and Mount Rose). It is a fun hike and combined with Freel Peak and Job's Sister makes for a nice day hike. The mountain also offers spectacular view of Lake Tahoe and its surrounding mountains. While Freel Peak is by far the most popular destinations in this area, Job's Peak despite its proximity sees much fewer visitors.

"Moses Job settled in Carson Valley, Nevada, about 1854, and operated a store. (Maule.) The general name 'Job's Group of Mountains' (which included Freel Peak at the time) was used in the State Surveyor General's Report of 1855, p. 141. The names first appeared in their present form on the Wheeler Survey atlas sheet 56B, 1876-77. The canyon was first named on the 15-minute quad."
- Peter Browning, Place Names of the Sierra Nevada

"Moses Job, an early Mormon settler, ran a store located near the eastern base of Jobs Peak. Maule suggested that the adjacent peak is named in memory of his sister. (Maule, 6.) In 1855 George H. Goddard placed flags on "Job's Peak." (Goddard, Report, 104.) The name "Job's Group of Mountains" appeared on a Goddard map. (Goddard, South.) The von Leicht-Hoffmann map of 1874 maned the peaks 'Jobs Peaks.' The Wheeler Survey map of 1881 applied the names 'Jobs Sister,' 'Jobs Peak,' and 'Freel Peak' to the group.

John A. Thompson, the 'Expressman,' reported to the Placerville Democrat on May 23, 1857: 'Our late townsman, Moses Job, arrived from Carson Valley, where he now resides, yesterday about noon. He reports the grain crop as looking well. On his way down, he met quite a number of persons going over the mountains on trading expeditions, and others en route to the States. Mr. J. reports the grass as abundant in the valley, and the stock as looking very fine, a supply from whence to this region, may be looked for in the fall. The miners in Gold Canyon, he reports as still doing well.' (Sacramento Daily Union, May 25, 1857."
- Barbara Lekisch, Tahoe Place Names


More information on getting there and climbing Jobs Peak