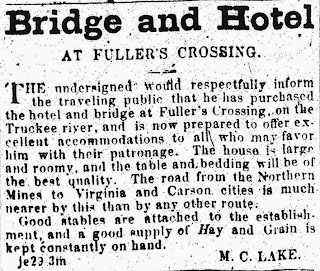 A newspaper advertisement by Myron Lake

Charles W Fuller, a settler from Missouri, gambled on travelers’ impatience to get across the river and stay dry.

By this time, the first rivers of gold had dried up in California. Still, prospectors continued to arrive in the Truckee Meadows, pursuing rumors that gold had been found in the mountains just 20 miles away. The “Rush to Washoe” had begun.

When the first Pony Express riders headed west from St. Joseph, Missouri in 1860, they passed through Mormon Station, some 35 miles south of the Truckee Meadows before crossing the Sierras into California. Other adventurous horsemen discovered a pleasant rest stop at Fuller’s Crossing. Nothing fancy, but shade trees and cool breezes were a relief after weeks of relentless heat in the desert. Snow-topped mountains in the distance gave riders a hint of the rugged terrain that lay between them and Sacramento.

Fuller took up this land and put up some small buildings. He also built a ferry boat for the river. He later constructed a low bridge which had to be fastened down during high water. Still the river could be forded at this point as it was shallow. The old ford ran diagonally from the point where the old gas works were, now the site of the Rialto Theatre, to the present library. Mr. Fuller was very poor and it was said that the first winter he spent at the crossing he wore a blanket tied around his waist as he had sold his only suit of clothes for seed corn.

It was a good location and as travel increased his little inn began to be a welcome sight to travelers. It was only a dugout and shack a little north of where the Riverside now is but travelers did not expect elegance or comfort in those days. The bridge was the important feature to the traveler. It was built in 1860. It was made of logs and heavy timber about six or eight feet lower than the present bridge.

Fuller’s bridge made the trip easier – until the river rose again and demolished the supports. Fuller’s luck seemed about to run out. Behind his back, critics of the bridge called it “Fuller’s Folly”, but the Missourian was determined to try again. He rebuilt the bridge in the spring of 1861, then looked around for a chance to quit the tool-bridge business. It was time to try his luck somewhere else.

In 1861, Fuller sold his bridge and hotel to Myron C. Lake, who renamed the spot Lake's Crossing and soon was charging a toll on the bridge. The Crossing became an important station on one of the main routes between northern California and the silver mines of Virginia City and the Comstock Lode. 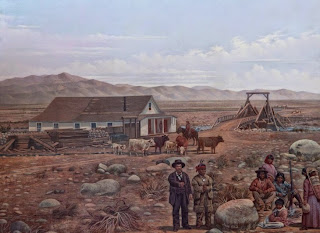 A drawing done in 1861 of Virginia Street when Myron Lake owned this area.
The house in the drawing is where the Riverside Hotel now stands. 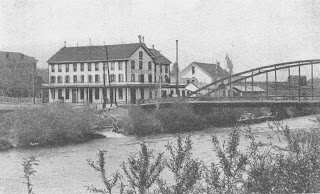 Circa 1910 Virginia Street. Notice the steel bridge, this was built by the city of Reno.
The white building is the Riverside Hotel. Across the street on Virginia stood Myron Lake's mansion
as seen in the next picture: 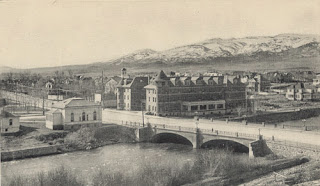 The Lake mansion has been moved as seen on the next picture. Notice the stone bridge. 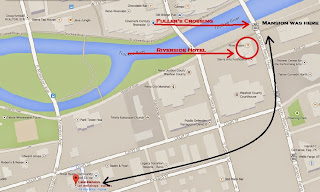