Las Vegas Review
Journal Thursday May 22, 2008
A mark of Manson 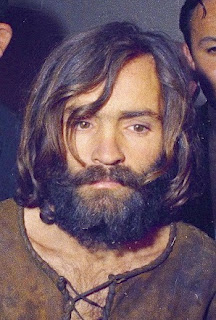 Investigators just wrapped up a fruitless dig for bodies at Charles Monson's hide out in California in Death Valley, but you don't need a shovel to find what the Manson family might have left at one Nevada ghost town. If someone is around to let you inside the old Nye County courthouse in Belmont, you can look for it on a door frame on the first floor--a simple patch of graffiti that now carries haunting undertones. Many old-timers in central Nevada believe the mark was left by a member of the doomsday cult, maybe even Charlie himself. And though state officials and historians won't confirm the notion, they don't exactly reject it either. "I have more reason to believe it than I do not to believe it," said Eric Johnson, region manager for the Nevada Division of State Parks.

"It's hard tellin'," added Tonopah native and historian Bill Metscher. "To me, it's entirely possible."

Even State Archivist Guy Rocha, a man who has dedicated his career to busting fantastic-sounding historical myths, doesn't completely dismiss the story of the Manson family in Belmont. For one thing, he saw the graffiti himself decades ago.

"There is something there that relates to the Manson family. Whether they put it there, I don't know," Rocha said. "It's a long-standing belief. It's claimed. I don't know how you verify it forensically."

Longtime Nye County resident Paula Kniefel serves as caretaker and part-time tour guide for the courthouse, now a state historic site. She said the graffiti reads, "Charlie Manson + family 1969," with a peace symbol drawn in the O in Manson. Kniefel said it looks like a pocketknife was used to carve the words into the wooden entrance of what used to be the county recorder's office.

Belmont, 255 miles northwest of Las Vegas, had one full-time resident in 1969, a woman by the name of Rose Walter. Before her death in the late 1980s, Walter told several people about the time that Manson and his followers squatted in the abandoned courthouse for a short while.

"She swore up and down that it was them who lived there and left" the graffiti, Kniefel said. "She said they didn't bother her. I don't have any reason to doubt her."

Henry Berg grew up in Smoky Valley, one mountain range removed from Belmont. Now he and his wife, Bertie, own and operate the historic Belmont Inn, just up the hill from the courthouse. Berg said he knew Walter a little and heard a different story about her interaction with Manson and company.

"She went over there with a shotgun and run them off," he said. "It's lucky. They could have come back and killed her."

They didn't, and Walter lived on into her nineties. Now that she's gone, though, the only ones left who might be able substantiate the story are Manson or another surviving member of the family, Rocha said. For that to work, you would have to find someone who was willing to talk to you and who might remember, through the fog of time and illegal drugs, a brief stop in central Nevada a few months before the Los Angeles killing spree. Manson himself might be able to shed some light on it, Rocha said, but it would be hard to trust what he told you one way or the other.

"This has taken on layers and layers of lore," he said. "It's hard to know what's really there."

Similar questions have swirled around the Barker Ranch at the remote, southwestern edge of Death Valley National Park. Manson and some of his followers were arrested there in October 1969, a few months after they committed a series of grisly murders in Los Angeles. For years, there have been rumors about unmarked graves on the property.

On Wednesday, though, a team of investigators put those stories to rest with the conclusion of a two-day forensic dig that yielded no evidence of human remains. No one seems to think there are any bodies left behind from the Manson family's visit to Belmont. If there are unmarked graves in the area, they probably belong to American Indians from 100 years ago or more, Berg said. For a time in the late 1800s, the silver mining camp of Belmont was Nevada's second-largest community with about 2,000 residents.

The two-story, red-brick courthouse was completed in 1867 and served as Nye County's central offices until the county seat moved to Tonopah in 1905. The building stood open and abandoned for decades, falling victim to vandals and scavengers. Kniefel said someone removed the flooring from the assessor's office, and the building's doors, windows, baseboards and crown molding were all carried off over the years. The building was at risk of collapse when Nye County deeded it to the Nevada Division of State Parks in 1974.

Since then, the structure has been stabilized and sealed from the elements. Last year alone, the state spent more than $500,000 to strengthen and "seismically retrofit" the courthouse, said Johnson, who oversees the far-flung Central Nevada-Fallon Region of the state park system. There are plans to renovate the inside of the building someday, but based on the state's current budget situation, Johnson doesn't expect that to happen anytime soon. "To be honest, it's not even on the radar," he said.

When the renovations do get done, Johnson said, an effort would be made to preserve some of the graffiti left in the courthouse through the years, including one carving reportedly made by prominent Nevada businessman George Vucanovich, the late husband of former Nevada Congresswoman Barbara Vucanovich. Without a doubt, the Manson family mark will be the highlight of the collection, Johnson said.