First off lets do a short "description" of Myron:

Myron Charles Lake (Feb. 1828-June 20, 1884), hotel-keeper/entrepreneur, was the hot-tempered, tight-fisted "first citizen" of Reno, Nevada. Between 1862 and 1873, Lake lorded over the town through his vast real estate holdings and monopolistic control of a vitally important toll bridge and road. He quickly assumed the posture of a stereotypical "robber baron," and in an unhappy marriage, often resorted to domestic violence. But he also wielded a keen business acumen and in so doing, ensured that the Central Pacific Railroad during the building of the great transcontinental project would run through Reno, thereby sparking the growth and prosperity of western Nevada. Where the Mansion stands today.

The Lake Mansion, built in 1877 by W.J. Marsh, was sold to Myron Lake in 1879. Lake is often considered the founder of Reno. In fact, his toll bridge across the Truckee caused the early settlement to be called “Lake’s Crossing”. The Lake Mansion was originally located near the river crossing at Virginia and California Streets in Reno where the “One California Avenue” building stands. (See Here)

The Mansion is a great example of the Italianate style house. With the hipped roof and veranda banding the house, it typifies upper middle class prosperity during the period. Well-detailed brackets, window frames, doors and balustrades testify to the quality craftsmanship which went into the structure’s construction. Among the impressive details of the Lake Mansion are the etched glass of the doorway, the period furnishings, and the carved woodwork over the sliding doors in the front parlor.

The Mansion has had 3 different addresses since it was built and the building has been moved twice. The first address was on the Truckee River and Virginia Street. In 1971, the mansion was threatened with demolition, but residents of Reno rallied to save the structure and formed the non-profit Washoe Landmark Preservation. The aging mansion was donated by the owners and moved to the Reno-Sparks grounds of the modern day Convention Center on the corner of Kietzke Lane and Virginia Street, which is now a small park across the street from The Olive Garden. It was moved around the same time the Liberty Bell Saloon was demolished (See Last Call for Liberty Bell). 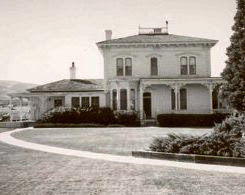 The Lake Mansion at its second location at Virginia Street and Kietzke Lane.

In 2004 the mansion was moved once again to its current downtown location at 210 Court Street. On July 11, 2004, the Lake Mansion moving slowly down Virginia Street. 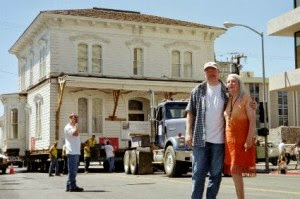 July 11, 2004, Bruce and Barbara Goff, descendants of Jane Lake, in front of the moving mansion, at the original location of the mansion on Virginia Street and California Avenue on its way to Court Street and Arlington Avenue.

I got a chance to go inside the mansion. Here is my video... Sorry no audio.

I did some work there not too long ago and the nice lady working said she'd be happy to host the Clampers and possibly be interested in having a plaque erected. I passed the business card on to Beau, hopefully it found its way into the right hands and the plaquin can come to fruition. Satisfactory