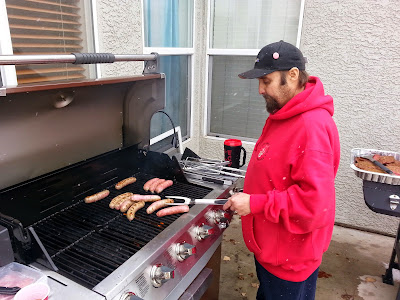 Amidst the outward expression of free spirit and turbulent years of the Vietnam Conflict a couple in sunny southern California got engaged. Wyman Hawkins & Lucille Cadlini married in a fall wedding in November of 1965 in Riverside County, CA.

They provided for their new family with employment for Wyman at Southern California Edison and secretarial work for the Chino School District for Lucille where they settled in Chino.

A transfer of employment would send the family backing for the Owen’s valley where they settled in Bishop before Pat turned one. Dad’s continued to work for Edison while mom began working in the Bishop School District.

Those early years for the Pat and Kim were filled with riding skate boards or bikes, floating inner tubes in the creek or simply waking to the Safeway to buy candy bars.

Formal education began at Bishop Elementary where Pat was encouraged by second grade teacher Jeff Bell to bring “James R. Peabody III” to school. Can you imagine the look on the little girls faces when Pat walked down the halls with a snake wrapped up his arm?

When Pat headed off to Rivana Middle School he was blessed by having a mentor Mr. White to guide him. You know those times when there just seems to be more to the story than meets the eye. Well Pat was encouraged once again by a teacher regarding a pet.

This time it was to take Chuck the school rat home for the summer. Funny thing is there was no plan for a welcome return in the fall and Pat got to keep Chuck. By the end of his Middle School years, Pat had a list of dates where mom was called to come pick him up after school because the bus didn’t wait for detention to finish.

Pat didn’t really treasure the idea of authority and would boldly call the principle “Fred.” When asked to call him Mr. Patterson, Pat would promptly reply, “He didn’t call me Mr. Hawkins so he is just Fred.”

With a love and care of animals of any kind, Pat enjoyed spending time with his bearded dragon George who hated broccoli like the president. George loved to try to hide but the labs in the hours would always search him out.

Pat played soccer for AYSO from 8-11 years of age and wrestled in school. Oh how mom can’t forget the blue rosebud pattern sheet going out the door with eye holes cut out for his ghost costume for Halloween. Nor catching Pat with a can of chewing tobacco.

Maybe that was a nice shade of green “Irish” green he turned as mom made him finish the entire can! He rode BMX as a lad as well. Pat was always spontaneous and unafraid to share his boisterous side and awesome sense of humor.

By the time he was attending Bishop High School Pat had a pretty clear path set out. You simply walk into the school’s front door, continue down the hall and out the back.

Not exactly found of formal education, Pat dropped out of school after his junior year satisfied with a GED. Away from school, Pat loved those family trips to Klamath Falls each year as well as duck hunting along Tule Lake near the Oregon border. He loved upland game with his dad where pheasants were flushed out and retrieved by Shaka his bird dog.

Closer to home, fishing or horseback riding Sunday afternoons after church were a hit. The time he reached up to steady himself along the rocks while fishing that will never be forgotten was when the rattle snake coiled and struck. As Pat pulled his hand a way in pain and whipped it around the snakes head came off its body and remained attached to his thump. Pat was blessed to live in a community that had anti venom as he was rushed to the hospital for many doses and the loss of part of his thumb.

Pat enjoyed sledding in the mountains as well as ice skating. What a sight it must have been with mom popping the car hood on arrival in the mountains and placing hot dogs and buns in foil on the engine and closing the hood. One the kids were ready for lunch, it was waiting under the hood.

The mountains also provided the family the opportunity to cut their own Christmas tree each year. Birthdays were always special for the Hawkins, especially when a special cake was made each year as the family went to watch the local Volunteer Fire Department fireworks display at the airport and the family sang happy birthday to America on the Fourth of July.

Pat’s dogs were a huge part of his life, he loved the lab found in the White Mountains and Pepper who rode inner tubes with him but refused to bring them back to Lola that gave him the sad face look at the shelter so Pat would rescue her.

Over the years Pat had a wide range of employment. During his youth he installed tire chains, broke down tires and pumped gas at the local gas station before going into construction. He made his way to Las Vegas for a time where he did landscaping.

He worked for a muffler company and even attended a mechanics school in Phoenix. He graduated from UTI’s heavy equipment school in Apple Valley as an operator.

After his father broke his hip, Pat became his caregiver until he passed in 2010, Pat moved to Reno where he began fixing up an old air force house in Stead. The Andes St. home was given coats of paint with his family’s assistance. Time was a bit off however for the economy and he had a hard time finding employment so Pat continued his love of watching football, listening to country, pop or the River Classic Rock.

Many hours were watched intently of the Food Network with the result in mouthwatering BBQ Pork rubs and tri-tip. Not sure as his beloved butterscotch pudding could wait until after that main meal? Mexican food was a hit for Pat as well as that big rare Prime Rib at the Texas Roadhouse. Action as well as the books of Stone Barrington and Jack Reacher were read.

Pat enjoyed becoming an active member in the “Ancient and Honorable Order of E Clampus Vitus” or simply known as the Clampers. He was a member of Bishop’s Local 395 unit called the “Slim Princess” before becoming a founding member of Reno’s chapter 1422, the “Jesse Lee Reno” group.

The group is dedicated to the study and preservation of the American West but is very active in community outreach. The local chapter found Pat assisting in Easter Baskets for kids at the Children’s Cabinet, to fundraisers for children with rare illness as well as assisting the needy at the homeless shelter.

In honor of Pat’s connection as an auxiliary member of the board, his cane has been donated to the group and will become the official “gavel” for all their events.

The ECV group over the past twelve to thirteen years was a wonderful merge of his big heart, loving and caring personality where he could accept you as you were. He never met a stranger and loved to help others from collecting toys for needy children or being there for you as a loyal best friend.

Sadly, Pat passed away in the early hours of February 22, 2015 in the family home in Reno, NV. Pat was preceded in death by his father Wyman Hawkins.

Here is a quick list of Clamper owned bars and Watering Holes in Reno! I will be updating this as needed.


Here is an interactive map (zoom out to see Bar-M-Bar and Sparks Lounge):