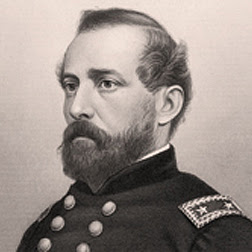 Born on June 20, 1823 in Wheeling, Virginia (West Virginia), Jesse Lee Reno was the third oldest of eight children born to Lewis and Rebecca Reno. The spelling of "Reno' is an anglisized version of the French surname "Reynaud". Jesse's ancesters, having arrived in America in 1770, shortly changed the name to the phonetically simple "Reno".

Jesse's family moved to Franklin, Pennsylvania in 1830 where Jesse attended school and lived out his formulative years. An area history describes Jesse as a boy "of handsome countenence, of medium stature, brave and quick in action, and a generous companion."

Jesse secured entrance to the United States Military Academy at West Point in 1842. Joining the class of 1846, Jesse would develop friendships with fellow classmates, George B. McClellan, George E. Pickett, George Stoneman, Darius Couch and Thomas J. Jackson. He would graduate eighth in his class of 59 on July 1, 1846, and was at once promoted brevet 2d lieutenant of ordnance.

During the War with Mexico in 1847 Lt. Reno commanded a Rocketry and Mountain Howitzer battery and fought in the battles Cerro Gordo, Contreras, Chumbusco, and Chapultepee, and in the siege of Vera Cruz. Reno was cited for "Gallant and Meritorious Conduct" and awarded the rank of Brevet First Lieutenant for his actionat the Battle of Cerro Gordo on April 18, 1847. He would again be cited for bravery and breveted a Captain for his action at Chapultepec and Mexico City on September 13, where he commanded a howitzer battery, and was severely wounded.

Reno's years between the Mexican War and the Civil War were spent at many posts throughout the country, including a brief stint as an assistant professor of mathematics at West Point from January till July, 1849. He was secretary of a board to prepare a system of instruction for heavy artillery in 1849-50 and was assistant to the Ordnance Board in Washington DC in 1851-53, where he met his wife-to-be Mary Bradley Beanes Cross. Promoted to the rank of First Lieutenant on March 3, 1853, Reno was given orders to conduct a road survey from the mouth of the Big Sioux River to Mendota, Minnesota. The survey took 2 1/2 months and laid out a route that was 279 miles long. Reno returned to Washington in the fall of 1853 to collate and compile his report.

Reno then spent several years as an ordnance officer at Frankford Arsenal, northeast of Philadelphia. In June of 1857 he was assigned as commander of an expediton to the Utah territories. The long two year assignment ended in 1859 when Reno was assigned as commander of the Mount Vernon Arsenal in Mobile, Alabama, until its seizure by the Confederates on January 4, 1861, when Reno's small force of 18 men overwhelmed without bloodshed by four companies of state militia. The state troops had been ordered by Alabama's Governer Andrew B. Moore to gain control of the post. A full week before Alabama seceded from the Union, the Civil War had come to then Captain Jesse L. Reno.

On July 1, 1860, he was promoted captain for fourteen years' continuous service. From February 2 until December 6, 1861, he was in charge of the arsenal at Leavenworth, Kansas

After being promoted to the rank of Brigadier General of volunteers by General Ambrose Burnside on November 12, 1861, Reno was given command of the 2nd Brigade. He trained and organized five regiments: the 21st Massachusetts, 51st New York, 51st Pennsylvania, 9th New Jersey, and the 6th New Hampshire. Reno's brigade actively participated in Burnside's North Carolina Expedition from February through July of 1862, where he led an attack against Fort Bartow, and the battles of New Berne and Camden. The Federals set out to capture Roanoke Island with nineteen warships, forty-eight transports, and 13,000 troops, leaving the rest of the forces at Hatteras Inlet. The fleet bombarded Fort Bartow on February 7, staying out of range of the other two forts, and skirmished with the seven vessels of CSN Flag Officer W. F. Lynch's "mosquito fleet." Burnside landed 4,000 men that afternoon at Ashby's Harbor, three miles south of Fort Bartow and by midnight had 10,000 men ashore. The Confederates guarding the shore retired to the Suple's Hill earthwork without opposing the Federals. In Burnside's attack the next morning US Brigadier General John G. Foster's brigade assaulted the works but were pinned down under heavy fire. US Brigadier General Jesse L. Reno's brigade slogged through a swamp on the Confederate right and charged the fort. The Confederates abandoned the redoubt, retreated north up the causeway, and CS Colonel Henry M. Shaw and 2,500 troops surrendered.

From April to August, 1862, he was in command of a division in the Department of North Carolina, and on July 18 he was commissioned major-general of volunteers.

On July 12, 1862, Reno was promoted to Major General and given Command of the IX Corps. In August Reno, under the command of General John Pope, would directly oppose his friend and classmate, "Stonewall" Jackson at the Second Battle of Bull Run and Chantilly.

On September 12, the IX Corps spent the day and evening in Frederick Maryland. Reno and three of his Divisions were sent on to Middletown at the foot of South Mountain on the morning of the 13th. September 14 saw Pleasonton's cavalry facing strong enemy opposition at South Mountain's Fox's Gap. He immediately asked Reno for infantry support and at 6 a.m. Reno sent his Fourth Division into the Gap. The Division commander General Jacob Cox met heavy opposition and passed word back to Reno for reinforcements.

By late in the afternoon, Reno's entire IX Corps was up at Fox's gap being personally directed by the General. Moving forward the Corps began driving the Confederates from Fox's Gap. Two hours into the attack, the advance stalled along the right flank. Reno rode forward with his staff to determine the cause of the delay. Rather than go directly to the right flank, Reno chose to start at his left and ride along the entire front length of his line, commending his troops for their excellent progress and battle conduct. About halfway across the line and in an exposed position, Reno stopped to observe the enemy's position with a telescope. Musket fire suddenly erupted from the confederate line and Reno was struck by a bullet that lodged in his chest. He was carried to the rear , where he saw his classmate and friend General Samuel Sturgis. Reno spoke to him and said "Hallo Sam, I am dead!". Sturgis thought Reno was joking and replied,"Oh no, General, not so bad as that I hope", to which Reno responded: "Yes, yes, I'm dead-goodbye!"

Reno was carried down the mountain and placed under a large oak tree where he was cared for by his surgeon, Dr. Calvin Cutter. At about 7 p.m. General Reno uttered his last words, "Tell my command that if not in body I will be with them in spirit."

General Ambrose Burnside eulogized General Reno when he issued General Order No. 17, announcing the loss of their leader to the IX Corps. "The commanding general announces to the corps the loss of their late leader, Maj. Gen. Jesse L. Reno. By the death of this distinguished officer the country loses one of its most devoted patriots, the army one of its most thorough soldiers. In the long list of battles in which General Reno has fought in his country's service, his name always appears with the brightest luster, and he has now bravely met a soldier's death while gallantly leading his men at the battle of South Mountain. For his high character and the kindly qualities of his heart in private life, as well as for the military genius and personal daring which marked him as a soldier, his loss will be deplored by all who knew him, and the commanding general desires to add the tribute of a friend to the public mourning for the death of one of the country's best defenders."

Jesse L. Reno also was remembered in Nevada, where the city of Reno was named after him.