The historic arch now located on Lake Street at the Truckee River is Reno’s most recognizable symbol. Fashioned after California city gateway structures, the steel arch was erected in 1926 at the intersection of Commercial Row and Virginia Street to promote the 1927 Nevada Transcontinental Highways Exposition, commemorating the completion of the Lincoln and Victory highways. At a cost of $5,500, incandescent light bulbs announced the exposition with blazing torches bracketing the name “RENO.”

When the exposition closed, the Reno City Council voted to keep the arch as a permanent downtown gateway, and Mayor E. E. Roberts called on Reno citizens to suggest a slogan for the town to be displayed on the arch. When none of the entries proved acceptable, a prize of $100 was offered, and awarded on March 14, 1929 to G. A. Burns of Sacramento for the winning slogan: “Reno, Biggest Little City in the World.”

With the move to neon lighting in 1934, the slogan was thought to be outdated and was replaced with the single word "RENO" in green neon letters. In response to public protest, the slogan was returned to the arch, in new Art Deco neon lettering. The arch remained unaltered on Virginia Street for the next three decades. By 1963, the community launched a campaign to raise $100,000 to replace the arch in honor of Nevada’s 100th birthday. The old arch was moved to Idlewild Park and replaced with a futuristic model in time for the 1963-64 New Year’s Eve celebration. That arch, modified to reflect its new home, now stands in Willits, California. The arch currently located on Virginia Street was installed in 1987.

A 1969 street widening project forced the move of the original arch to Paradise Park, and in 1988 it was moved to the city’s storage yard because the cost of necessary repairs was too high. There, it languished in disrepair until 1994, when a movie production company came to its rescue while shooting the film Cobb, about legendary baseball player Ty Cobb.

The film company restored the arch and placed it over East 4th Street near Valley Road for four days of filming. No sooner had the production company removed the arch than the public clamored for its permanent return. A community-wide grassroots effort was launched, and in 1995 the arch was reconstructed on Lake Street next to the National Automobile Museum, home of William Harrah’s famed automobile collection, where it once again welcomes visitors to downtown Reno. 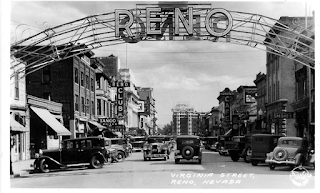 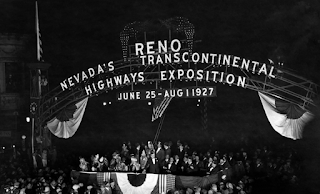 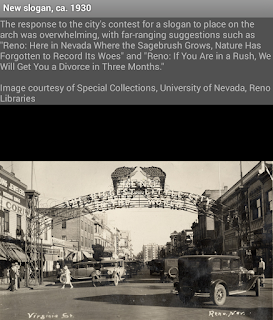 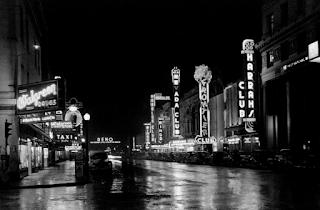 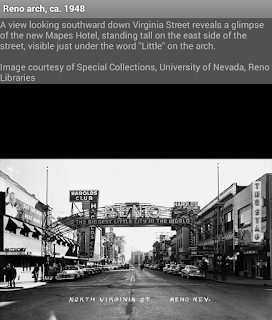 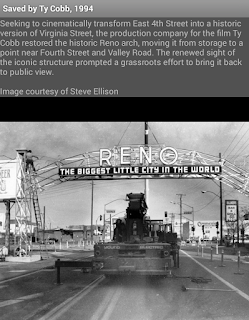 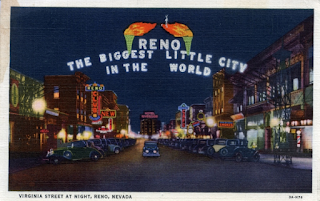 Kit Carson (1809–1868) was a frontiersman, western guide, and trapper. He first gained fame as a distinguished guide for explorers in the western frontier, when America had a love affair with the untamed land west of the Mississippi River. Thanks in part to fictional tales and exaggerated magazine stories, Carson's reputation as a guide soon turned to that of legend, and the myth of Kit Carson was born.

Before he became a legend

Christopher "Kit" Carson was born in Madison County, Kentucky, on December 24, 1809. His father, Lindsey Carson, fought in the American Revolution (1775–83), a war in which the American colonies fought to win their independence from Great Britain. He married Rebecca Robinson in 1796. Kit was the sixth of ten children. The Carson family soon settled in Howard County, Missouri. When Kit was just nine years old, his father was killed in a tragic accident.

It is doubtful that Carson received much of a formal education, because he remained nearly illiterate, or unable to read and write, his entire life. At the age of fourteen he became an apprentice (a person who works for someone with a specific skill in order to learn that skill) to a saddle maker. After less than two years, Carson left the saddle maker and joined a group of traders who were on their way to Santa Fe, New Mexico.

Life on the western frontier

Carson's career in the West spanned the years from 1825 to 1868, a period of rapid national expansion, exploration, and settlement. From 1827 to 1829 young Carson spent time working as a cook, driving a wagon, interpreting Spanish, and mining copper. In August 1829 he gained invaluable experience after joining a trapping party bound for California. For the next year and a half Carson trapped animals along the streams of Arizona and southern California.

In 1831 Carson returned to New Mexico, where he immediately joined up with the experienced trapper, Thomas Fitzpatrick (c. 1799–1854). With Fitzpatrick's men, Carson headed north into the rugged central Rocky Mountains. For the next ten years, Carson worked as a trapper all over western America in what is today known as Utah, Colorado, Wyoming, Idaho, and Montana. During this time spent in the wilderness of North America, Carson learned everything he needed to know in order to become a respected guide.

In 1836 Carson married an Arapaho Indian woman. The couple had two children, only one of whom—a daughter—survived. After his first wife died, Carson married a Cheyenne woman. The marriage did not last, and Carson took his daughter to St. Louis, Missouri, to further her education. For the next eight years, Carson split his time between his daughter in St. Louis and his trapping duties in Taos, New Mexico.

In 1842 Carson's fate arrived by steamboat when explorer John C. Frémont landed in St. Louis. Frémont came to St. Louis looking to hire the well-known guide Andrew S. Drips to lead his expedition to the Wind River in Wyoming. Unable to find Drips, Frémont chose Carson instead. From June until September, Carson guided Frémont's party west through South Pass to the Wind River Mountains and then back to Missouri.

Over the next several years, Carson, along with Fitzpatrick, worked as a guide for Frémont on three expeditions through Oregon and California. The timing could not have been better for Frémont — or for Carson. The American public was fascinated with life in the West and the tales of hostile Indian tribes and unsettled land that could be found on the western frontier. Frémont's published reports on his expeditions soon became famous, as did Kit Carson. Although many of Carson's adventures would become wildly exaggerated, no one could deny his contributions to the settling of the American West. Many of Carson's accomplishments were popularized in Dr. De Witt C. Peters's 1858 book, The Life and Adventure of Kit Carson, the Nestor of the Rocky Mountains. (By referring to Carson as a nestor, Dr. Peters meant that Carson was is a leader in his field.)

In 1846 Carson served in California with Frémont at the outbreak of the Mexican War (a war fought between Mexico and the United States from 1846 until 1848 that resulted in U.S. ownership of much of the area that is now known as the American Southwest, which had formerly been part of Mexico). During this time his duties were quite dangerous, as he carried dispatches, or messages, between command posts in enemy territory. When Carson was sent to Washington with dispatches, he was stopped by General Stephen W. Kearny (1794–1848) in New Mexico. Kearny ordered Carson to lead his troops west to California. At the battle of San Pascual (1846), with Kearny's tired men losing the battle, Carson, along with two others, was able to slip through enemy lines to call for reinforcements. Although Kearny's men were unable to take San Pascual, the reinforced army soon captured San Diego, San Gabriel, and Los Angeles, California, in rapid succession. Later, President James K. Polk (1795–1849) called Carson a hero and appointed him lieutenant in the mounted (on horseback) rifle regiment. However, the Senate rejected this appointment, and Carson returned to Taos.

Career as an Indian agent

By 1849 Carson had settled near Taos to farm and do occasional scouting for army units fighting hostile tribes. Carson also served in the Office of Indian Affairs, first as an agent and then as a superintendent of Indian affairs for the Colorado Territory. In 1854 he became the agent for several southwestern tribes. For years, Carson worked to keep peace and to ensure fair treatment of Native Americans.

While working for the Office of Indian Affairs, Carson often clashed with his superior, Territorial Governor David Meriwether. Carson disagreed with many of Meriwether's policies and thought that Native Americans were being treated unfairly. In 1856 their conflicts boiled over when Meriwether suspended Carson. Meriwether later arrested Carson, charging him with disobedience and cowardice. Carson soon apologized and got his job back working as an agent.

Back in the army

With the outbreak of the Civil War (1861–65), Carson left his position with Indian Affairs and was soon appointed a lieutenant colonel commanding the First New Mexico Volunteer Regiment. The Civil War was a war between the northern states and southern states that was fought to decide whether or not slavery would be allowed in new territories, and whether or not the South would leave the Union to form an independent nation. During the war, Carson fought against invading Confederates (soldiers from the southern states) at the battle of Val Verde. Carson also directed successful campaigns against the Apache and Navajo from 1862 until 1864. In his last battle he defeated the Kiowa, Comanche, and Apache tribes in the Texas panhandle. In 1865 he was appointed as brigadier general (an army officer who is above a colonel) of volunteers. For the next two years Carson held assignments in the West until he left the army in 1867.

In 1868 Carson was appointed superintendent of Indian affairs for the Colorado Territory. He never had a chance to work in this position. He died May 23, 1868, at Fort Lyon, Colorado.

Although Carson's later career serving his country in the army and establishing relations with Native Americans was impressive, the name Kit Carson will forever bring to mind thoughts of the wild frontier and westward expansion.

Carson City, Nevada is named after him. 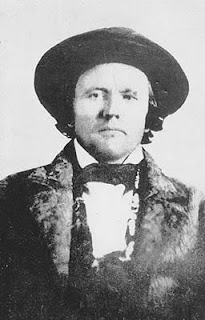 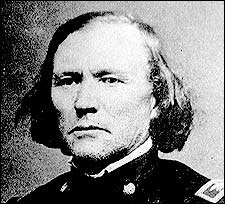